I have been working with Visual Studio Database projects starting with Database Professional to its successor SQL Server Data Tools. Within this post I wish to share some of the project topologies that I have used to manage my project databases requirements

Before starting I would like to cover the 2 ways that database projects can be referenced.  As these methods play an important part of the projects topologies without having to develop code. 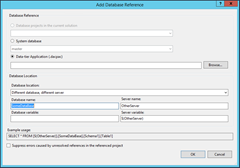 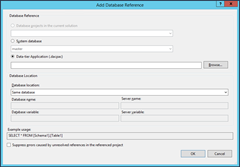 The reason behind how I came to create theses topologies were due to the following reasons:

I was working on a database warehouse project, which was using DB Pro, was having deployment problems.  The deployments were failing due to circular references as database required objects be created in each of the other databases.  To get a deployment to work I had re-create the deployment script a few times.

There was an added advantage of splitting the projects in this way. It allowed the DBA to check the deployment for table rebuilds.  As he only had to check the output of the storage project.  However there was some extra configuration management caused by this method, this was mitigated within our deployment framework I was using at the time.

Another project I worked on made use of SQL Server replication to replicate a subset of objects. To ensure that the objects being replicated where consistent between the databases I use the following project topology:
The publication and subscriber project used the composite project reference to this publication project.
This helped ensure that the publisher and subscriber database had a consistent model for the replicated objects.  Also any changes only needed to be made to one project.

Another topology I've used within my database projects is to separate any standard/self-contained code into a separate project. Then apply composite reference if required.

Here are some examples:
Here are the following reasons why I placed the standard code into a separate project:

Posted by Steven Wright at 15:52 No comments: Links to this post