- July 09, 2014
As mentioned in a previous post I've recently been working with a SQL Server unit test framework: tsqlt. I would like to share how I managed to integrate the framework and unit test into my project life-cycle.

The tsqlt framework has a few requirement which are as follows
As unit test are required to be contained within the same database as the objects being tested, also due to the way SQL Server Data Tools (SSDT) project validation works, the easiest solution would be to add the unit test and the framework objects into the same project of your application database.

My method to implement composite SSDT database project was as follows: 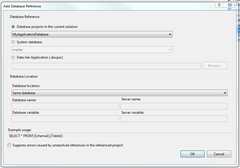 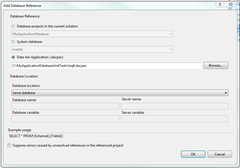 Setting up the projects in this method means I can deploy my application project without the unit tests and the framework to all the environments. Then add the unit test to any one of my  environments: development, test or separate unit test server.

The reason for creating a dacpack file was to have a single reusable file for my next projects. And if the unit framework is updated I only have to update a single file.  Also hopefully at some point the SSDTS project will support the use of NuGet. This would mean that I can upload my dacpack to a NuGet server and add the package reference.  Then if I ever updated the server package the project would automatically pick up the new version. (There is a fork within the NuGet project which already allows this: https://nuget.codeplex.com/workitem/2439.)

Here is a link to find out more about composite projects: http://blogs.msdn.com/b/ssdt/archive/2012/06/26/composite-projects-and-schema-compare.aspx.

SQLpackage has a setting which will allow a composite project to deploy its composite references objects at the same time. This allow the unit test project to deploy the unit tests including the application database and the tsqlt framework database objects. However be aware that only one Pre/Post deployment file is executed which is one that is attached to the dacpack listed in the SQL package source file parameter. So the composite references project have post/pre-deployment requirements are not executed.  This can be a problem if your application database has a post-deployment script to load reference data.

A couple of closing notes:

To create a unit test class within SSDTS for tsqlt add the following extended property on the schema which is to become a tsqlt test class: tSQLt.TestClass with a value of 1
e.g:

And creating unit test the store procedure must start with "test "

Anonymous said…
Visual Studio noob here. Do you have to do anything with the .dacpac after making a reference to it? Does it magically end up in source control somehow, or does it need to be manually added to the project?

After adding the reference, I did a compare between the new tSQLt database project and the database that I created the .dacpac from, and the project wanted to delete all the non-existent objects from the database. Perhaps you can also point me to some pages that explain how to work with .dacpacs as references?

Steven Wright said…
Hi Lee Anne, You will need to ensure that the tsqlt.dacpac is added into source control.

The way I handle this was to create a Solution folder call Reference then added the tsqlt.dacpac file. This will then allow Visual Studio to download the file when you, or someone else, does a Get Latest at the solution file level.

When Comparing the project against a target database you will need to set the following option: Include Composite Objects which is under General Tab. This will make the compare treat References as part of project and compare them against the target database update/create/delete as appropriate.

For more information about Reference here is a link: http://msdn.microsoft.com/en-us/library/jj684584(v=vs.103).aspx

Anonymous said…
Excellent, thank you! Got this set up and working now, and I had forgotten about the 'Include Composite Projects' check since I initially set up my solution.

Anonymous said…
Hi, I'm trying to export the .dacpac and while that appears to work, when I make the reference, it is complaining that the associated .dll isn't found. Are there extra steps needed to included the CLR stored procedures in the .dacpac?
Thanks!
Greg
7/4/15 03:14

Steven Wright said…
Hi Greg
When using SQLPackage to export the tsqlt database there should have been a DLL file eported as well. This DLL file needs to be copied the DACPAC as well.

Popular posts from this blog

- February 28, 2012
I was asked to help create a maintenance plan for a SQL server . I chose to implement the plan using PowerShell for the following reasons:  PowerShell is a procedural scripting language and the maintenance plan would have a few procedural steps and iterations through objects. PowerShell was also built on top of the .Net framework. This means I could make use of the SQL Shared Management Object (SMO) library within my script. SQL Server also has a SQL PowerShell provider , which is pre-loaded when you run SQLPS. Support also has been extended to SQL Server Agent as there is a native PowerShell, which uses SQLPS, job subsystem. I have been using PowerShell for a while and found it really useful; it allows you to solve problems, much more easily, than using the standard SQL tools. A copy of my script, and related scripts, are available from my SkyDrive using the following link: OneDrive The maintenance script, SQLServerMaintanceTask.PS1 , does the following, depending of th
Read more

Azure SQL Server IaaS SSIS: A required privilege is not held by the client 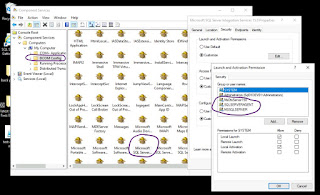 As mention in a previous post, we are using Azure SQL Server IaaS to help our transition to the cloud. The main reason for this is how some of our SSIS projects, which we inherited, were created. Some were using SSIS to manage the transactions, which uses MSDTC not supported in Azure. Use extra .Net libraries to read JSON and office files; external programs to do file operations like decompression. Migration timelines and priorities we didn't have time to refactor these projects. While ago we started to deploy our SSIS projects to our Azure SQL Server IaaS virtual machine, a Windows 2019 server with SQL Server 2019, to get the following error: SSIS Deployment Error 6522 "A required privilege is not held by the client". We able to resolve our problem by using the steps we found in the following blog posts: System.ComponentModel.Win32Exception: A required privilege is not held by the client while Deploying SSIS Project | Microsoft Docs . Fixing SQL 2012 SSIS Deployment Err
Read more
Tweets by Zogamorph